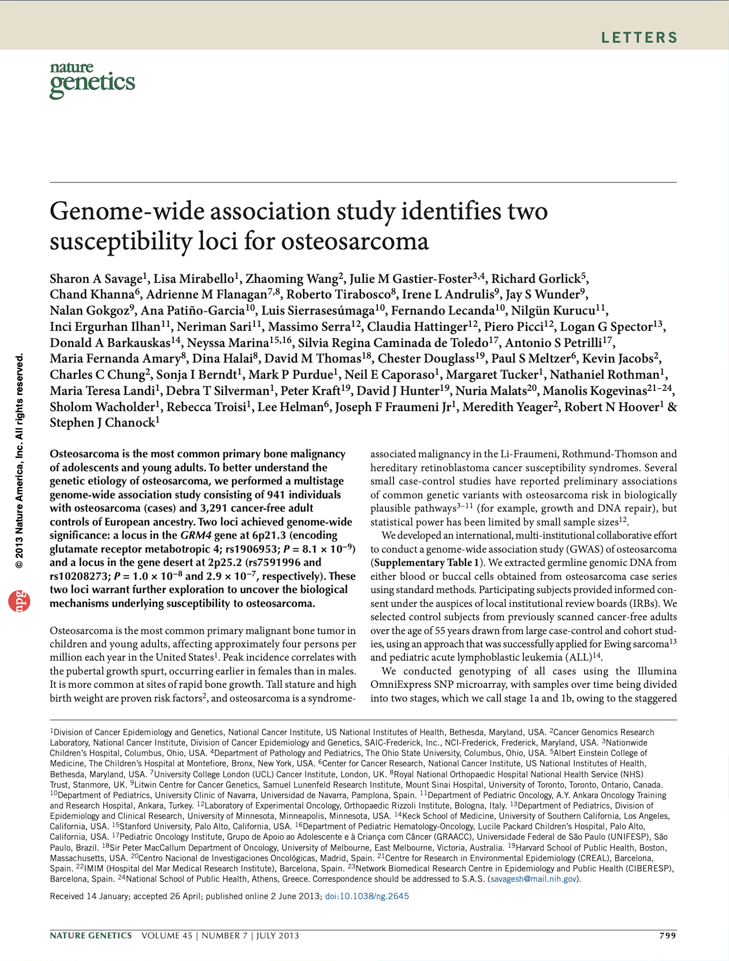 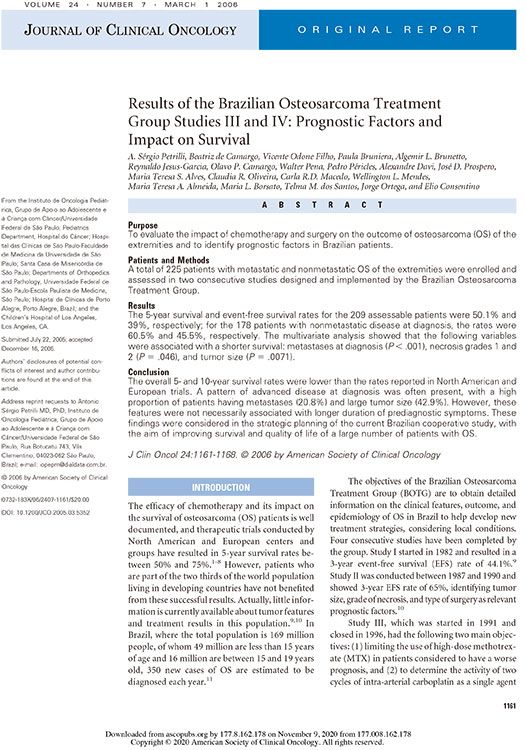 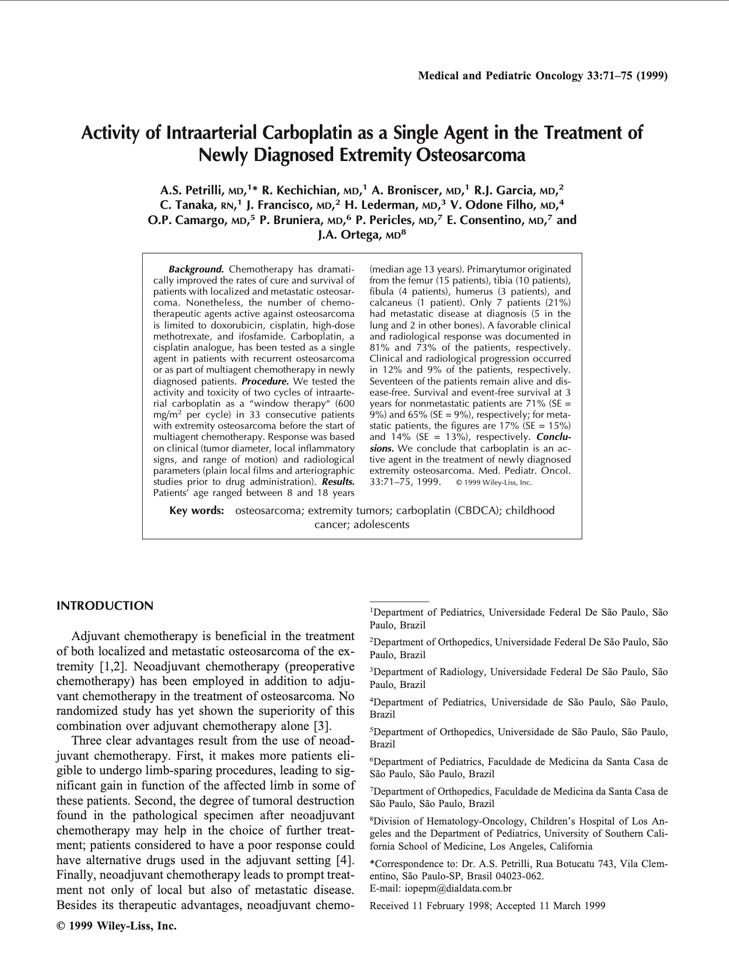 Medulloblastoma is the most common malignant tumors of central nervous system in the childhood. The treatment is severe, harmful and, thus, has a dismal prognosis. As PRAME is present in various cancers, including meduloblastoma, and has limited expression in normal tissues, this antigen can be an ideal vaccine target for tumor immunotherapy. In order to find a potential molecular target, we investigated PRAME expression in medulloblastoma fragments and we compare the results with the clinical features of each patient. Analysis of gene expression was performed by real-time quantitative PCR from 37 tumor samples. The Mann-Whitney test was used to analysis the relationship between gene expression and clinical characteristics. Kaplan-Meier curves were used to evaluate survival. PRAME was overexpressed in 84% samples. But no statistical association was found between clinical features and PRAME overexpression. Despite that PRAME gene could be a strong candidate for immunotherapy since it is highly expressed in medulloblastomas.

To assess whether the cystic craniopharyngiomas can be controlled with the
use of intratumoral applications of interferon alpha. Method: Nineteen patients with the
diagnosis of cystic craniopharyngioma were treated with intratumoral chemotherapy with
interferon alpha from January 2002 to April 2006. All patients underwent placement of
an intracystic catheter connected to an Ommaya reservoir. Through this reservoir were
made applications during chemotherapy cycles. Each cycle corresponded to application
of 3,000,000 units of interferon alpha three times per week on alternate days totalizing
36,000,000 units. Response to treatment was evaluated by calculating the tumor volume
on MRI control after one, three and six months after the end of each cycle. Patients who
developed worsening of symptoms or who had insignificant reduction in tumor volume
during follow-up underwent repeat cycle chemotherapy. Results: Four patients received
four cycles of chemotherapy, three patients received three cycles, six patients received
two cycles and six patients received one. The lower percentage of reduction in tumor
volume was 60% and the bigger reduction was 98.37%. Eleven patients had a reduction
greater than 90%. Five patients had a tumor reduction between 75 and 90% and in three
patients the tumors were reduced by less than 75%. No deaths occurred during treatment
and side effects of interferon alpha were well tolerated. No treatment was discontinued.
Follow-up after the last application ranged from one year and five months to three years
and nine months. Conclusion: The intratumoral chemotherapy with interferon alpha
decreases the volume of cystic craniopharyngiomas and so far can be considered a new
therapeutic alternative.

Purpose Ependymoma (EPN) accounts for approximately 10% of all primary central nervous system (CNS) tumors in chil- dren and in most cases, chemotherapy is ineffective and treatment remains challenging. We investigated molecular alterations, with a potential prognostic marker and therapeutic target in EPNs of childhood and adolescence, using a next-generation sequencing (NGS) panel specific for pediatric neoplasms.
Methods We selected 61 samples with initial diagnosis of EPN from patients treated at Pediatric Oncology Institute-GRA ACC/UNIFESP. All samples were divided according to the anatomical compartment of the CNS - 42 posterior fossa (PF), 14 supratentorial (ST), and five spinal (SP). NGS was performed to identify somatic genetic variants in tumor samples using the Oncomine Childhood Cancer Research Assay® (OCCRA®) panel, from Thermo Fisher Scientific®.
Results Genetic variants were identified in 24 of 61 (39.3%) tumors and over 90% of all variants were pathogenic or likely pathogenic. The most commonly variants detected were in CIC, ASXL1, and JAK2 genes and have not been reported in EPN yet. MN1-BEND2 fusion, alteration recently described in a new CNS tumor type, was identified in one ST sample that was reclassified as astroblastoma. Additionally, YAP1‐MAMLD1 fusion, a rare event associated with good outcome in ST-EPN, was observed in two patients diagnosed under 2 years old.
Conclusions Molecular profiling by the OCCRA® panel showed novel alterations in pediatric and adolescent EPNs, which highlights the clinical importance in identifying genetic variants for patients’ prognosis and therapeutic orientation.

Purpose Gliomas represent the most frequent central nervous system (CNS) tumors in children and adolescents. However,
therapeutic strategies for these patients, based on tumor molecular profile, are still limited compared to the wide range of
treatment options for the adult population. We investigated molecular alterations, with a potential prognostic marker and
therapeutic target in gliomas of childhood and adolescence using the next-generation sequencing (NGS) strategy.
Methods We selected 95 samples with initial diagnosis of glioma from patients treated at Pediatric Oncology Institute-GRA
ACC/UNIFESP. All samples were categorized according to the 2021 World Health Organization Classification of Tumors
of the CNS, which included 39 low-grade gliomas (LGGs) and 56 high-grade gliomas (HGGs). Four HGG samples were
classified as congenital glioblastoma (cGBM). NGS was performed to identify somatic genetic variants in tumor samples
using the Oncomine Childhood Cancer Research Assay® (OCCRA®) panel, from Thermo Fisher Scientific®.
Results Genetic variants were identified in 76 of 95 (80%) tumors. In HGGs, the most common molecular alteration detected
was H3F3A c.83A>T variant (H3.3 K27M) and co‐occurring mutations in ATRX, TP53, PDGFRA, MET, and MYC genes
were also frequently observed. One HGG sample was reclassified as supratentorial ependymoma ZFTA-fusion positive after
NGS was performed. In LGGs, four KIAA1549–BRAF fusion transcripts were detected and this alteration was the most recurrent genetic event and favorable prognostic factor identified. Additionally, genetic variants in ALK and NTRK genes, which
provide potential targets for therapy with Food and Drug Administration-approved drugs, were identified in two different
cases of cGBM that were classified as infant-type hemispheric glioma, a newly recognized subgroup of pediatric HGG.
Conclusion Molecular profiling by the OCCRA® panel comprehensively addressed the most relevant genetic variants in
gliomas of childhood and adolescence, as these tumors have specific patterns of molecular alterations, outcomes, and effectiveness to therapies

Objective: To outline the epidemiological profile and prognosis for Ewing’s sarcoma in the Brazilian population. Material and Methods: The medical records of 64 patients with intraosseous Ewing’s sarcoma who were treated at the Pediatric Oncology Institute, IOP-GRAACC-Unifesp, between 1995 and 2010, were retrospectively evaluated. Results: The statistical analysis on the data obtained did not correlate factors such as sex, trauma, pathological fracture and time taken for case diagnosis with the treatment outcome. Factors such as initial metastasis, lung metastasis, tumor site, age, recurrence and type of surgery showed results corroborating what has been established in the literature. Conclusion: The prognosis in cases of Ewing’s sarcoma was mainly influenced by the presence of metastases at the time of diagnosis.